Crabs in your computer!

Japanese scientists have almost created a computer that runs on crustacean power.

They’ve built a bunch of tunnels that function as logic gates (the basic AND, OR and NOT commands that render a computer functional) when crabs scuttle through. A bird-like shadow gets the critters moving in the right direction. The researchers found that the little biters move in a surprisingly predictable manner and theorise that it may be possible to run a computer on crab power, though they have no plans to build one right now. The entire environment was designed to be as crab-friendly as possible.

Fun fact: only Aussie soldier crabs are thought to be reliable enough for the experiment.

Check out the diagram below to see how the tunnels work. 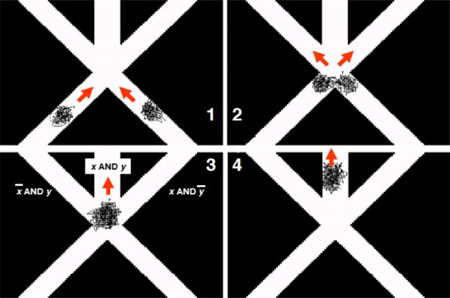 Shaun and Sean: the dream team