Google time machine lands down under

When Google first announced its new time travel feature for Street View, it was only rolled out to a small batch of users, with the rest of us itching to take it for a spin. Knowing it can sometimes take an age for new features to reach us here in Australia, I wasn’t going to hold my breath for this one. So I was pleasantly surprised to find that it now works and is usable on the streets of Australia.

Google’s time machine allows you to compare views from the same spot on different dates. Of course the length of this time period is limited by when the Google cars made their first trips around the streets, as well as when the latest shots have been uploaded.

A brief history of the world

Google started taking images in 2007, but some more remote places weren’t snapped until later. Recent 2013 shots exist for a number of Australian locations, but certainly not all. So although real historical significance will take time to build up, there’s still a lot that can happen in seven years.

See Christchurch before the earthquake

Google Street View has preserved the entire city of Christchurch in a visual records, prior to the major earthquakes of 2011. In any instance like this where a place is significantly altered by a disaster, the time travel feature will be useful as both a historical record and as a reference for rebuilding. Google is yet to upload post-earthquake photos of Christchurch. When it does, it will be an interesting – yet chilling – opportunity to see the effects of the quake on this city.

Back when the Orion office was a paddock

Orion Creative headquarters here in the Atlas building at Norwest is a great example of how the time machine can show major difference in just 6 years. In 2007 the spot was a grassy green paddock. In 2009, construction was underway, and in 2013 the fully finished building is tenanted and operational.

Ready to get your time traveller on? To to go for a ride, type your selected address in to Google maps and click on Street View. Once you’re amongst it at street level, you’ll notice a small clock icon (it currently also says ‘NEW’ next to it in red).

Click to access a small screen with sliding timeline. Slide back and forth to compare the location over time, and click on the magnifying glass if you’d like to see the image full screen. 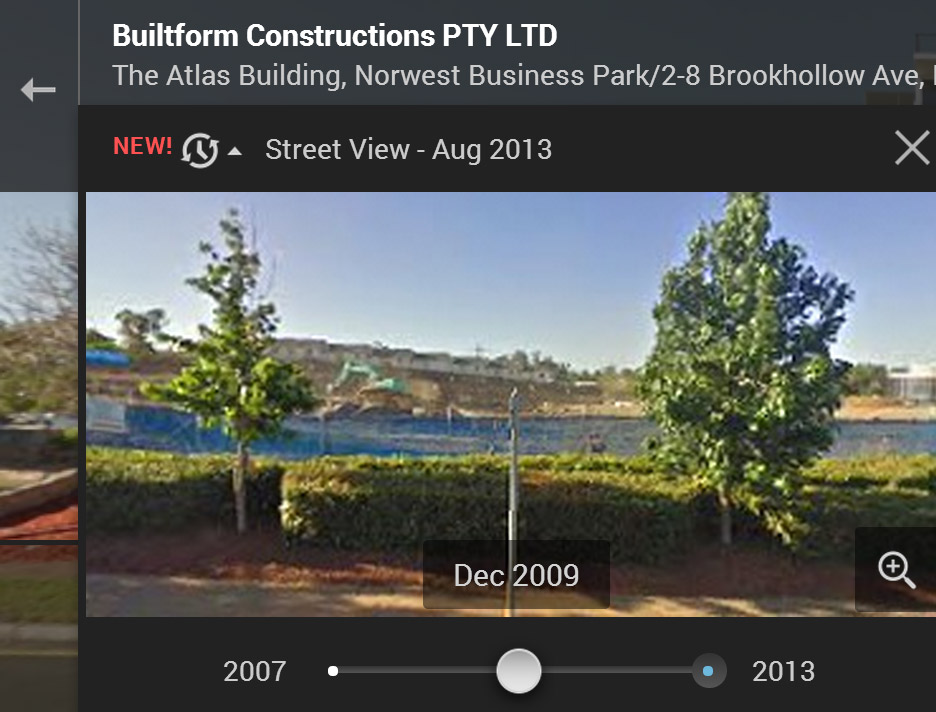 The world is a big place. If you’ve make any fascinating discoveries in your time travelling trips – we’d love to hear from you in the comments below.

A good brief is the start of a great project